Piccolo splits himself in half, and the two forms fight each other. Piccolo uses this method to train by himself at a high intensity. Meanwhile, Gohan sleds down a sandy hill. After he crashes, he tries to find a way out of wherever he is to his mother (he thinks his home is close by) After coming to the same spot he originally was at first, he realizes, he must be on an island. Brainstorming, he builds a boat, so he can pay a quick visit to his mother, whom he misses. As he drifts on the sea at night, a huge storm is heading Gohan’s way, and he can’t swim. 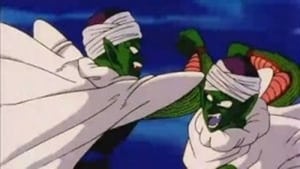