The End of Snake Way

After a rough day of training with Piccolo, Gohan rests for the next day. Gohan has a bad dream involving Raditz beating his father, and he suddenly wakes up. Gohan looks up at the moon which has mysteriously reappeared, and overcome by his nightmares of Goku’s death, he losts control of himself and attacks Piccolo, who has arrived to see what’s going on. Piccolo does his best to stop him, but once Gohan grows his tail back and changes into a Great Ape with another gaze at the moon, he was powerless to stop him. Piccolo tries to destroy the moon, but finds that it is a projection from Goku’s old spaceship. Piccolo destroys the ship, reversing the transformation. Meanwhile, after a long trip, Goku finally makes it to King Kai’s planet, and finds a friendly little monkey, whom he believes to be King Kai. 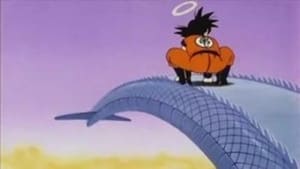