As Goku heads toward the battlefield, Piccolo, Krillin, and Gohan devise a plan to stop Nappa: they plan to pull his tail, which will weaken him enough to take him out. As Piccolo grabs Nappa’s tail, Gohan rushes to finish the fight. However, it seems that Nappa and Vegeta have evolved past their weaknesses, and they are no longer crippled when their tail is pulled. With their plan a failure, Nappa begins to pound on Piccolo and Krillin. Only Gohan is left to fight, and the young Saiyan is holding his own against Nappa. Enraged by Gohan’s attack, Nappa fires a blast at Gohan that could finish him off. 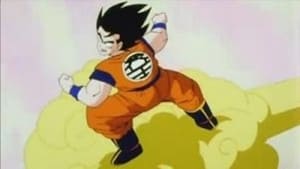