Goku is able to easily beat Nappa, thanks to King Kai’s training. With a measured power level in the thousands, he is vastly superior to the man who so easily defeated his friends. Goku avenges all of his friends. Having seen enough of the fight, Vegeta orders Nappa to stop and let him fight Goku. To have some more fun, Nappa decides to attack Gohan and Krillin, only to be stopped by Goku’s Kaio-ken attack. Unable to move, Nappa asks Vegeta for help, but the cruel prince does not tolerate weakness. He kills his partner with a sadistic display of power. 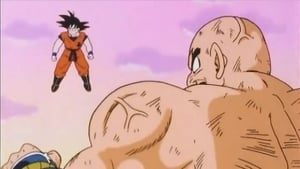