Thanks to the Kaio-ken x3 technique, Goku has the upper hand against Vegeta, but the Saiyan Prince will not give up so easily. He decides that if he can’t beat Goku, he will destroy the Earth. He flies high up in the air and fires his Galick Gun attack. Goku unleashes the Kamehameha wave, and the two energy blasts meet in midair. Goku and Vegeta pour all of their energy into this attack, and after a long struggle, Vegeta’s blast is pushing Goku’s back, even with Goku using the Kaio-ken x3 attack. With no choice left, Goku uses a Kaio-ken x4 attack, and with the extra power, he is able to blast Vegeta into space. However, Vegeta is able to recover, and he decides to become a Great Ape for his rematch with Goku. The evil Saiyan Prince starts searching for the full moon, but couldn’t find it (it’s because the moon was destroyed by Piccolo before the Vegeta and Nappa’s arrival). Thinking Goku must have blown up the moon just to prevent him from transforming, Vegeta returns to Earth where Goku is completely spent and claims to have a trick up his sleeve. After telling Goku the origin of how Saiyans transform into Great Apes through Blutz Waves: the power of the moon that reaches 17 million zenos, he creates and launches an artificial moon into the sky. Absorbing the Blutz Waves reflecting from the artificial moon, Vegeta begins to transform into a Great Ape as Goku looked on in horror. Meanwhile, Krillin and Gohan feel the tremendous surge in energy coming from the battlefield, and decide to head back. 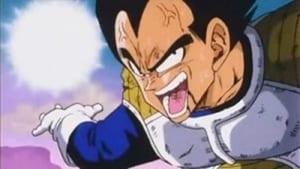