As Gohan fights against Vegeta, Goku gives Krillin the part of the Spirit Bomb that he was able to save. As Krillin prepares to unleash the ball, King Kai says not to use his eyes to throw it, but to feel it out. Sensing the right moment, Krillin fires the bomb, but Vegeta is able to dodge it. Goku telepathically communicates with Gohan, telling his son to redirect the blast at Vegeta, who has jumped into the air. Gohan is able to aim it directly at Vegeta, and lands a direct hit. However, Vegeta falls back down to Earth, and recovers from the blast. He blew away the Z Fighters with a giant explosion of energy, but finds that they withstood the blast, separated from each other. Vegeta is about to destroy them one by one starting with Gohan, when he notices in horror that Gohan’s tail has grown back. 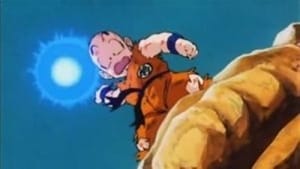