Vegeta attempted to rip off Gohan’s tail to prevent him from looking at his artificial moon and transforming, when Yajirobe jumps in and stops him by cutting through his armor with his sword, resulting in a heroic distraction. Gohan recovers, and then on Goku’s telepathic commands, he looks at Vegeta’s moon and transforms into a Great Ape. However, unlike Vegeta, Gohan can’t control himself in this state. But quickly stopped by Goku and Krillin’s cries for him to defeat Vegeta, Gohan quickly regains some of his consciousness and resumes the fight, pounding on Vegeta. Vegeta is able to cut off Gohan’s tail in midair, but as Gohan falls to Earth, he lands on Vegeta and crushes him before finally reverting to his normal form. Vegeta pulls out his remote and summons his spaceship. As he crawls toward it, Krillin attempts to kill him with Yajirobe’s sword. Goku tells him to stop, and let Vegeta go. His life spared, Vegeta promises the Z Fighters revenge when he will return as he leaves the Earth in his spaceship for good. The battle with Vegeta is over. 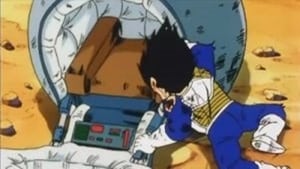