A group of wild animals chases Gohan when he falls into a hole in the desert, where he discovers an ancient probe robot in the cavernous ruins below. After Gohan reactivates the robot, it tells him not to disturb it, but reconsiders when the boy starts to cry and, reluctantly, watches over him, as he is still dependent on others. Gohan tries to dig the robot out of the sand as it tells him how, thirty years previous, it had been buried by an earthquake as it was excavating the ruins. 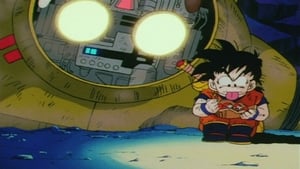